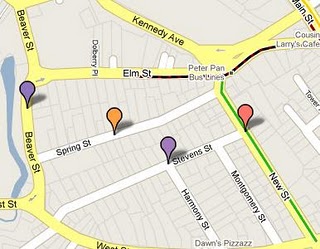 The Special Investigations Division of the Danbury Police Department conducted an undercover sweep on Thursday, Oct. 28, which resulted in the arrest of eight individuals who are being charged with prostitution.

After numerous complaints of prostitution on Spring, New, Stevens, and Beaver streets in Danbury, Conn., the police department finally decided to execute the sweep.

Jodi Davenport, 25, of Mendes Road in Danbury; Kathleen Richdale, 35, of Ventura Avenue in Danbury; Tanya Perry, 41, of Crest Avenue in Waterbury; and Shaun Reed Critelli, 28, of West Wooster Street in Danbury, were charged with prostitution.

Becky Teck, 38, of North Nabby Road in Danbury; Patricia Bastan, 28, of Spring Street in Danbury; Sydney Darton-Ritchie, 25, of Aaron Samuels Boulevard in Danbury; and Jennifer Turlay, 27, of Dorsett Lane in Brookfield, were charged with prostitution as well as possession of drug paraphernalia.

When I first heard about the sweep and arrests, my initial thought was: It's about time. For years, people have joked around about the prostitution on Spring Street and it almost seemed like no one, not even the police, really cared that it was going on.